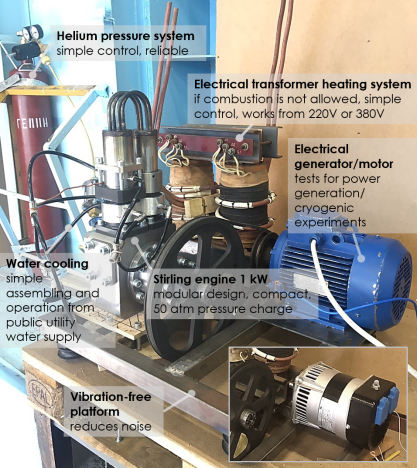 August 4, 2017, Moscow. Thermal Motors has completed the manufacturing and acquisition of elements for the new multi-purpose experimental unit based on the proprietary Stirling engine (priority number 2017108103/06). We are entering the start-up testing stage. The completed experimental unit is planned to be used for novel research studies at Skolkovo Institute of Science and Technology in the areas of solar and biomass power generation, waste heat recovery, and hybrid transportation systems.

Before the first launch of the engine, a number of preliminary tests have to be completed. The experimental unit consists of several subsystems to be tested separately. These subsystems include the electrical heating, the water-cooling, the helium pressure system, and the stirling engine mechanical drive. 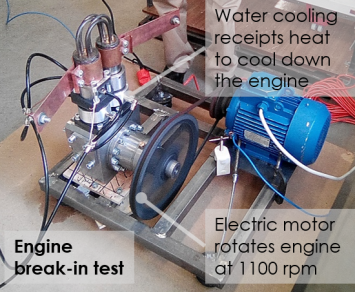 The engine break-in test was completed to fit-in the sealing elements of the mechanical drive in the shaft bearing system and the piston-cylinder pair. Additionally, the test allowed identifying the vibration and thermal state of the engine. Thanks to the properties of the Stirling thermodynamic cycle, the engine can operate as a cryogenic machine or as a heat pump if rotated by an electric motor. The break-in test has successfully demonstrated these properties of the engine.

The water cooling system has been also successfully tested during the break-in test. The system has removed heat generated by friction in the engine drive system.

Testing of the electrical heating system demonstrated its successful operation and simple control. Electrical transformer generated electrical current that supplied the required amount of heat to the engine heater head. Ability to work with 220V and 380V voltage levels along with a simple system control helped to vary the heat supplied to the engine heater head during the tests, thus simulating different heating conditions. The electrical heating system that is easy to operate and control was specifically developed for experimental purposes. In real environment, the role of the electrical heater can play a solar concentrator, a waste heat exchanger, a combustion chamber, and other heat generating systems.

Thanks to the original modular design of the engine, it is easy to conduct separate testing of subsystems and to improve the technology. Next step is the test of the pressure system and the long-waited first engine start-up.

The results of research conducted using the multipurpose experimental unit will enable the development of cheap, efficient, and scalable multi-fuel conversion technology for a wide spectrum of applications in the range between 1 kW to 100 kW for the on-land use and the deep-space exploration.

The project to deliver the experimental unit is conducted in collaboration with Skoltech Center for Energy Systems and with the support of Hydraulics and Strength Department (Peter the Great St.Petersburg Polytechnic University, Institute of Civil Engineering (ICE).

The development of the engine by Thermal Motors LLC is a part of a larger research work to develop externally heated engine technologies. The joint work is conducted by a group of Russian organizations, including Hydraulics and Strength Department (ICE), the Naval Academy of the Admiral of the Soviet Union fleet of N.G. Kuznetsov, South Ural State University, Skoltech, and Thermal Motors LLC.

Check the news on our web-page soon. Write to us if you are interested to learn more.